This past weekend, Mike H, Steve and I, traveled up to Plattsburgh, NY to do a Century ride through the Adirondacks. A ride that is near and dear to my heart. This ride is put on by the Adirondack Garda. All proceeds are donated to the Tour de Force, a charity ride that raises money for the families of Police Officers killed in the line of duty, nationwide. I’ll detail the Tour de Force in a later post.

This is the 3rd annual Valcour Brewing Company Century Ride. It was previously called the Dry Dock 100. I rode in the 2014 event and I was extremely excited to be able to have a chance to be a part of it again. The inaugural ride was a 103 miles. A figure eight that started in Plattsburgh, came back into town at mile 50 for a fantastic lunch stop and looped out and back for another beautiful 50+ miles.

The 2016 event featured 4 rides. 25, 50, 78 and 103 miles through the beautiful Adirondack Park and alongside Lake Champlain. Each ride featured perfect roads, absolutely stunning scenery, a quality lunch stop, well stocked rest areas and 2 awesome post ride parties. All riders, received an Adirondack Garda t-shirt, Valcour Brewing Company/VBC Century pint glass and some first rate swag. The gun went off at 8:30am for the 50/78/103 mile rides. The 25 miler, was an out and back, that started after lunch.

For the 103 miler, it was a tale of two different types of weather. First, the rest stops were at miles 25, 50, 75 and 94. For the first 25 miles, there was a strong head wind. You sort of forgot about the wind as you came to the top of a hill and were hit with an incredible mountain top view. As you made the turn and looped back into Plattsburgh from the 1st rest stop to lunch, the wind changed directions and the road grade cooperated. That might have been the fastest 25 miles I have ever ridden. 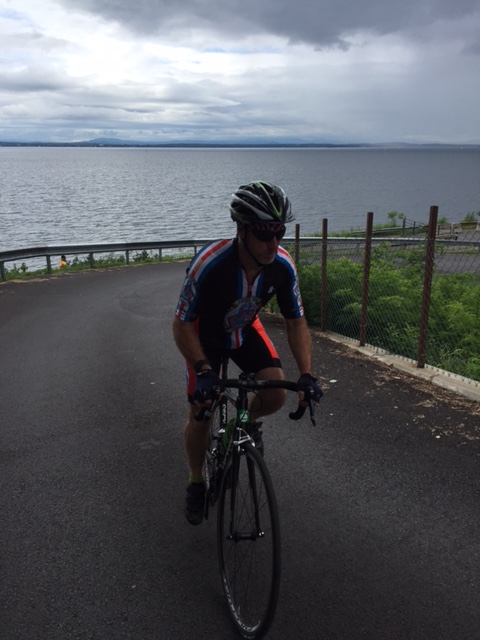 We were treated to a nice lunch on Lake Champlain. Darcy, Ann and a bunch of other volunteers, really did a wonderful job. From the sign in to the aid stations(which were top notch), everything was done to make sure the riders slipped through the course with ease. The Plattsburgh Police Department and the New York State Police did a fantastic job with the lead out and traffic control at the intersections.

After lunch, about a mile in, you hit the only big hill on the course. It twists and turns as you climb for approximately 1.5 miles. You drop back down into farmland and fight the wind for another 20 or so miles. Along the way, we passed over 100 cyclist from Canada that were pedaling through one of the best cycling regions in the country. At mile 75 we rolled into the 3rd rest stop just off the border of Quebec on Lake Shore Drive. Across the lake, you could see Vermont. The wind turned to our backs again as we made our way into Plattsburgh along the lake.

The last 2 miles are on a bike path, along Lake Champlain, that leads you right into the VBC parking lot and through the finishing chute. We were greeted with cheers and directed upstairs for the post ride party. Valcour had several different beers to choose from in a saloon that overlooked the lake. Down the hall, the Adirondack Garda provided a delicious recovery feast. We went back to our rooms to shower up and headed over to an undisclosed location for  a pool party, complete with margarita machine, beer, BBQ, hot tub and great people to sit around with, relax and reminisce about a great day.

The following day, Bob and Bruce took any willing riders on a 50+ mile recovery ride up through the Lake Placid area, with a ferry ride across the lake to Vermont for lunch. We were sorry to miss this excursion as we opted to head home in the morning, but heard it was a good time!  Just a few more pics of this fantastic event: 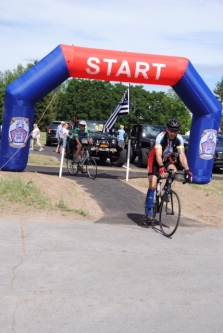 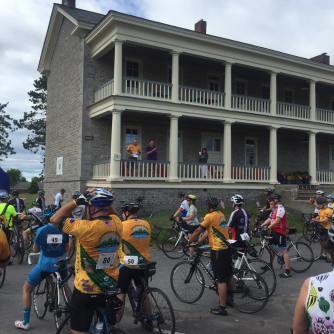