This past weekend, Jason and I took the long drive up to Vermont’s Northeast Kingdom to sample the Rasputitsa Gravel Road Race, a 40 mile trek over some of the toughest roads the Green Mountains have to offer. With over 4500 feet of elevation gain, the course challenges the most adventurous of riders. 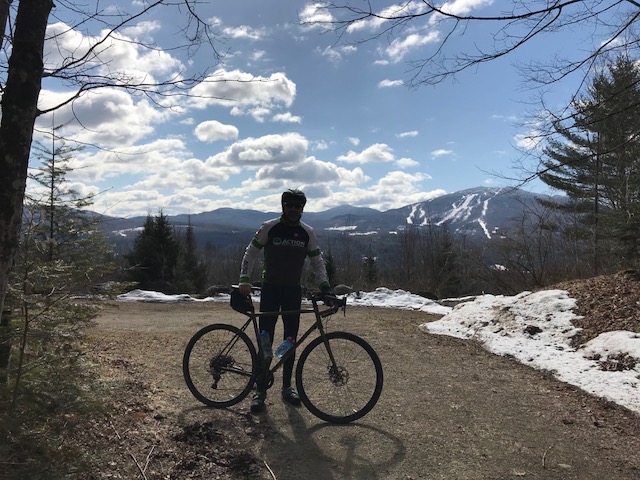 The event was everything they said it would be and more.  Themed after David Bowie’s “We Could Be Hero’s”, it was a world class cycling event, complete with top notch pre and post ride festivities, including a Bowie cover band that was spot on! 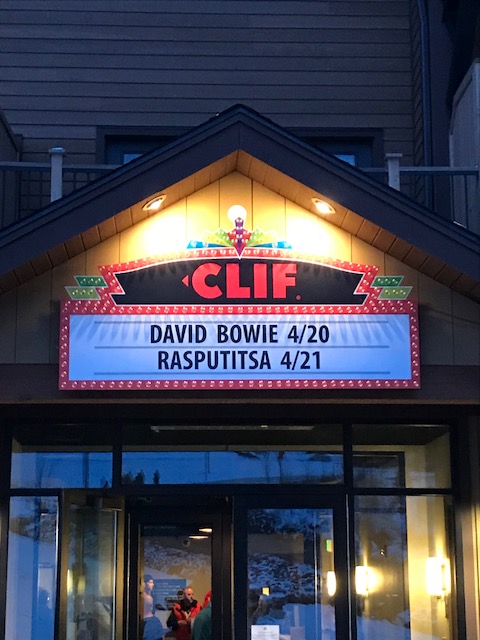 At 45 degrees and sunny, things seemed to be shaping up quite nicely. Starting at Burke Mountain in East Burke, the course dropped into town and after a couple of miles, made its way onto the hard-packed dirt roads.  The first 10 miles seemed to pass by extremely quick. I was starting to think, all the talk about muddy roads and snow covered trails was all hype. 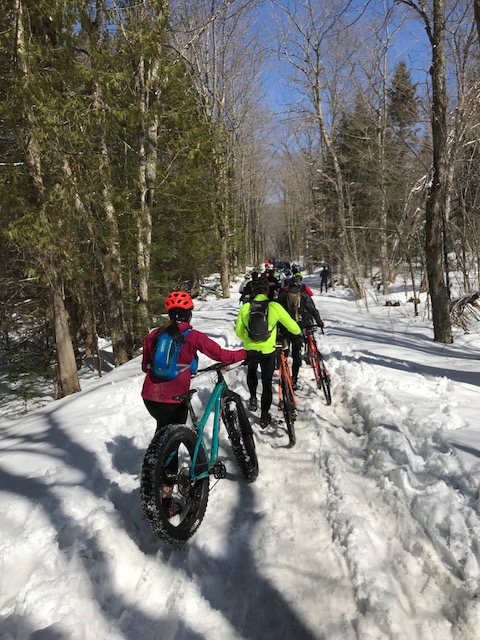 Then, came Cyberia (why it’s spelled this way, is another Rasputitsa mystery). As we were climbing up the mountain, a volunteer said there was a lot of snow on top. He wasn’t kidding. A half foot of snow turned the joy ride into a hike a bike. If you were able to ride through, you couldn’t, as riders hiked single file down the narrow trail for about 1.5 miles. As advertised, Rasputitsa (Russian for “the mud Season”, when roads become difficult to traverse) was starting to hurt. I don’t know who that young lady was that was giving free hugs at the end of Cyberia, but she certainly brought a smile to many tired souls. 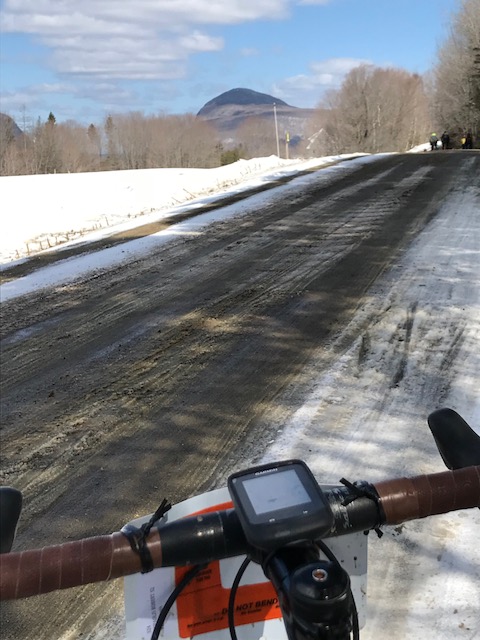 As soon as we were out of Cyberia, the bottom fell out as riders shot down the mountain. Jason got away from me rather quickly. His mtb skills were on full display, as was the case for most of the day. Wherever you were on the course, mountains were visible, near and far. The next 25 miles, were more of the same: Beautiful scenery, monster climbs, amazing volunteers and fantastic rest stops. Some might say the maple shots were the best or the Rasputitsa bottles and Clif bars came at a much needed time or the craft beer was cool, but, what did it for me was the little girl that handed me a donut as I chugged up that monster hill past the last rest stop. It believe she knew I was struggling. 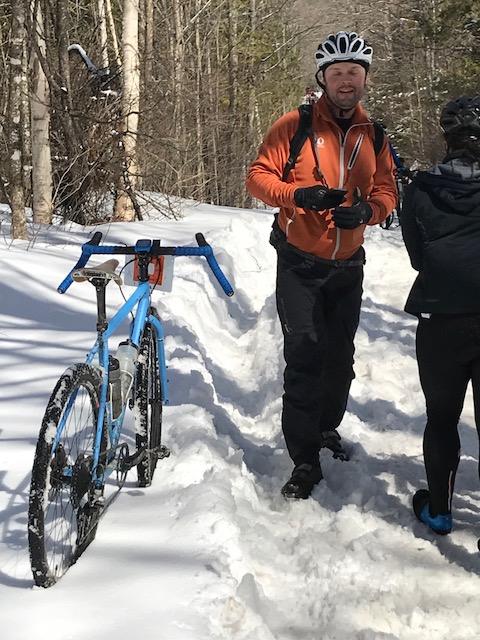 Coming down the back side, you could see the ski resort. All around me, grimaces turned to smiles, well for only a few minutes. That’s  when we turned left into what seemed like another Cyberia. I couldn’t help but think, why would they do this to me as I kept falling while trying to ride through. Coming out of it, snow became blacktop. Blacktop became snow and the finish line was in sight. 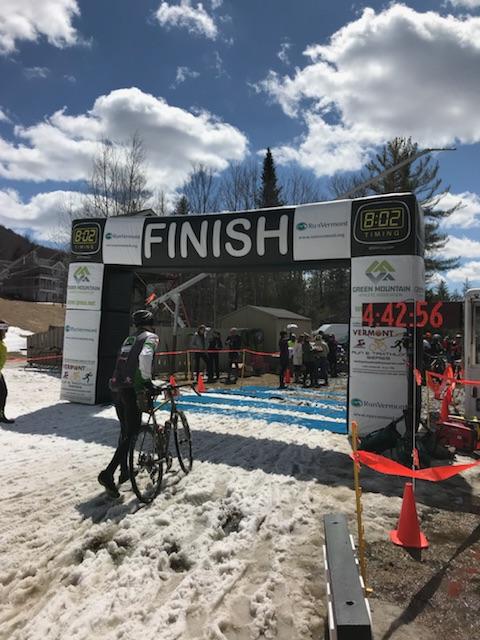 What a great feeling as hundreds of finishers hung around to cheer on the riders coming in! We dropped our bikes at the car and joined in the celebration that is Rasputitsa. Tired and fulfilled, I will be back next year, I can’t wait! 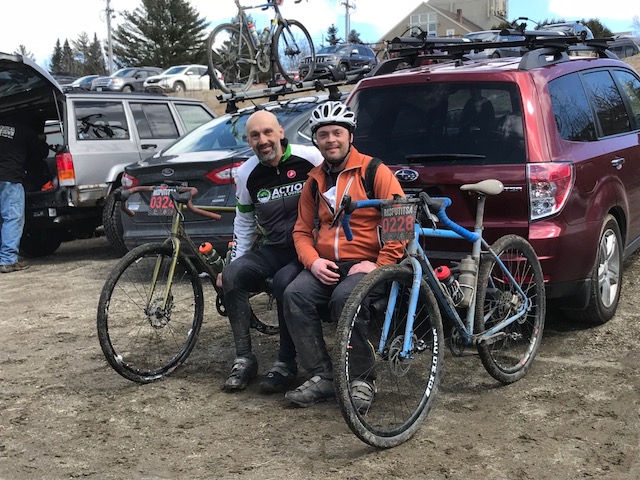 Occasionally you just go out for a pedal. By that, I mean, you scrap all plans and just pedal. I planned to do a long ride with lots of hills as kind of a last ditch prep for the Rasputitsa Gravel Race on April 21st in Vermont.

By late afternoon, when it appeared that the forecast of a warm day was not going to happen, I decided to enjoy an easy jaunt through the High Knob section of the Delaware State Forest. 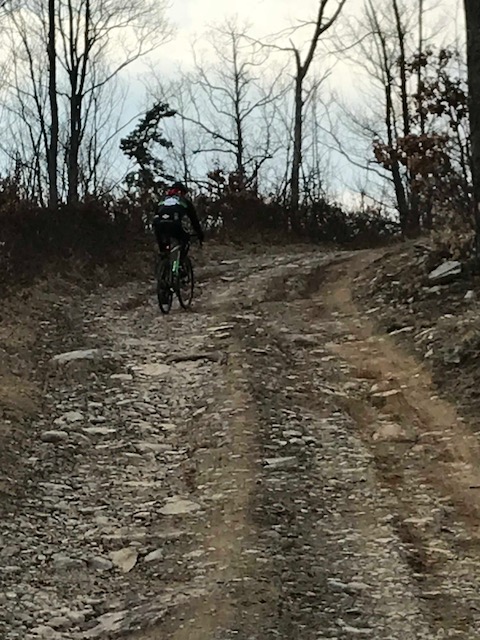 I met up with Mike at the Maple Run parking area on Rt. 402 and pedaled down Hobaday Road to Highline Road and past Pine Flats. We explored the Hay Road Extension (all gravel roads) until it abruptly came to an end at a gate with numerous no trespassing and keep out signs. That deep in the woods, that’s as far as I go. 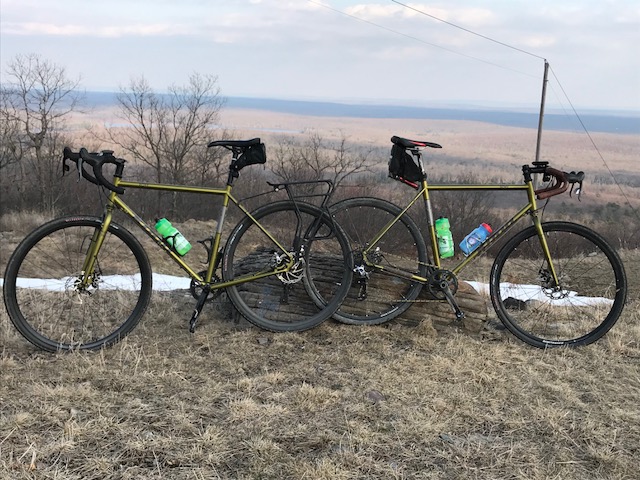 We turned around and headed back. Before we made the turn on Rt. 402, we decided to climb to the top of the High Knob. The loose gravel and muddy surface ascends as it winds around a large rock formation, providing incredible views this time of year, from the top. An easy descent and smooth cruise to the parking lot, capped a really nice ride. Turned out to be just what I needed. When Mother Nature throws you lemons, make lemonade!

This may seem like an odd time to review a winter boot. It is, but after receiving them in February, I wanted to put in a fair amount of miles before deciding whether or not they become a staple in my winter riding gear. 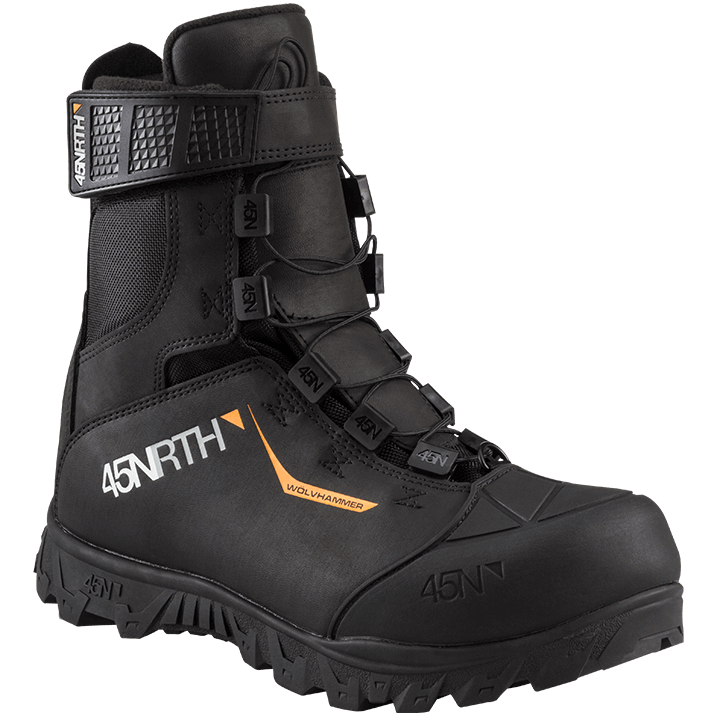 I’ve been wanting to find a way out of shoe covers. So, I purchased a pair of 45NRTH Wolvhammer winter boots in February. 45NRTH rates these boots at 0-25 degrees Fahrenheit. I think that is a fair statement. Usually I wear two pairs of wool socks, my shoes, toe covers and thermal shoe covers. A lot of prep just to have numb toes that hurt badly after an hour plus in 10 degree weather.

With one pair of socks, I set out on a 14 degree day on a February morning, fully expecting my big toes to experience the same old story. To my surprise, my feet stayed nice and warm for the entire ride. Styled like a mountaineering boot, the Wolvhammer has a full grain leather and ballistic nylon shell that provides a barrier that keeps your feet feeling rather cozy. The waterproof membrane keeps your feet dry.

I’ve worn these boots on my mid fat mtb as well as my gravel bike. They’ve performed well in the really cold stuff, but when Mother Nature treats us to a warm winter day, go back to your shoes. I have to say that the only drawback is that at upwards of 25 degrees and it feels like your wearing an oven.

The soles are rugged and perfectly capable on those long winter hike a bike rides, snowshoeing or just a simple-stroll through the woods. Recessed cleat attachment is pretty much the norm for mtb shoes.

Putting them on and taking them off turned out to be a breeze. The laces pull tight with an internal cord lace that Velcro’s to the tongue. Then a heavy duty Velcro strap cinches the whole deal.

After 7 winter excursions, I can honestly say that the 45NRTH Wolvhammer boots will become part of my regular winter get up.

Weather patterns have shifted the last few years. What this means long term, I’m not sure. What I do know is that in the northeast, we are able to ride our bikes much later into the year. Our winters have spilled into March and April, bringing us some late snowstorms and chilly spring weather.

However, this holiday weekend, was warm and for the most part, sunny. With a series of weird snowstorms coming up this week, putting in some quality miles was high on my list of priorities. 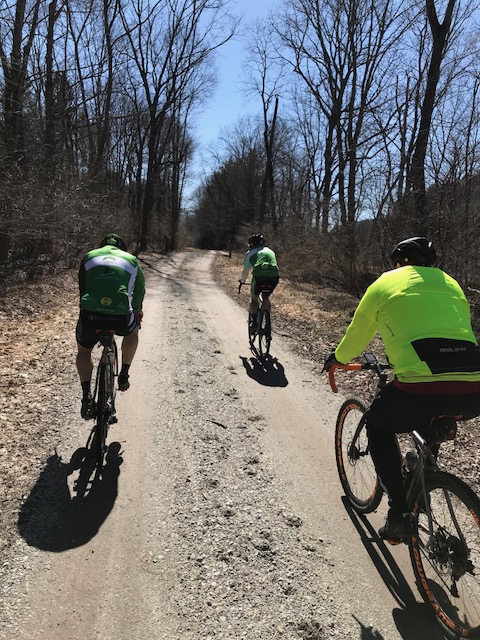 Saturday was a group ride. I met up with Eric, Joe and Andrew at Action Bikes & Outdoor in Milford and set out on a mix of B roads, dirt roads and gravel. We slithered through Milford, dropped down past the Metz Icehouse, up to Rt. 209 and over the Milford Bridge. A bumpy ride down what Eric coined “Old Mine Field Road” (due to the many potholes) across Tuttles Corner and up the Peter’s Valley climb.

About a mile past Peter’s Valley Crafter’s Village, We veered left onto Brook Road, a dirt path that cuts right through the Walpack area. Brook Road becomes Mountain Road after going through a gate and over a small bridge. 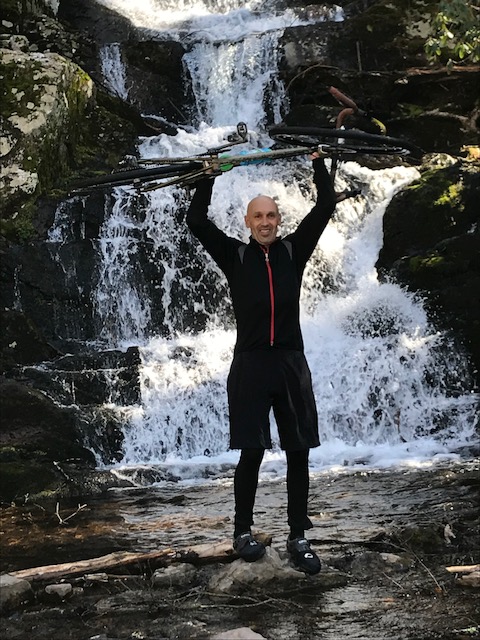 Midway down Mountain Road, the crown jewel of our ride appeared. Buttermilk Falls cascades almost 100 feet off the Kittatinny Ridge. With the Appalachian Trail passing across the top, it’s a popular destination for local hikers and sightseers. 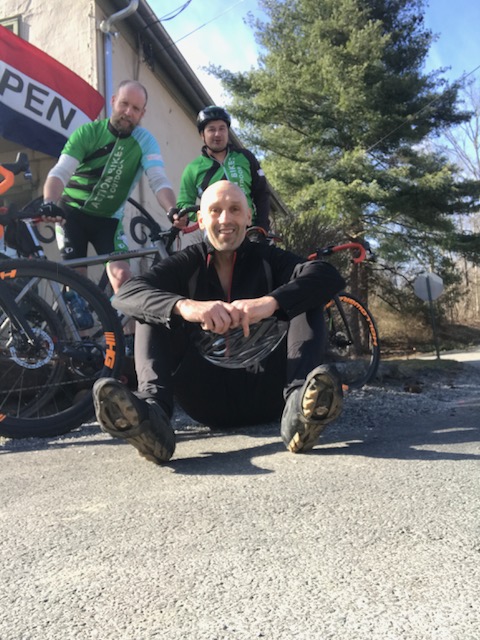 Eric peeled off and over the Dingman Bridge as we cruised back along Old Mine Road and back to the shop. It was nice to finally get in an extended ride with good company. 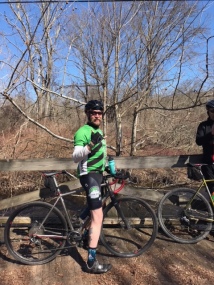 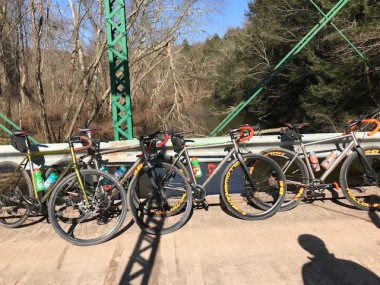 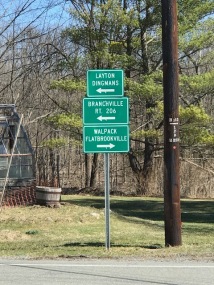 Easter Sunday started out on the dreary side. Rain and snow flurries in the morning turned to sunshine in the afternoon. I went out for a jaunt through the Delaware State Forest. It seems the winter wreaked havoc on the roads, as potholes are everywhere and most of the gravel is off to the sides. Melting snow created a muddy surface that made pedaling feel like a leg workout. My bike and I were covered in mud. It was so much fun!

Riding through puddles and creek crossings, turns a dirty ride clean, well, almost. The only way to get your bike dirty is to get out and ride. So what are you waiting for, put down the tablet, laptop or phone and pedal into the woods.

What’s playing (what am I listening to while writing or what’s dancing around in my head while riding),  today – Queen & David Bowie – Under Pressure 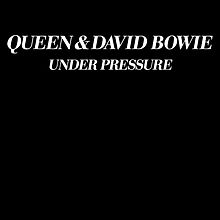