Skip to content
December 19, 2019January 10, 2020 ridingmilford
Recently, I found out just how important riding a bike is to me. For many years, I’ve been able ride on a fairly regular basis. My family has been very understanding of my need to get outside and pedal for a few hours on most days and work has always allowed me to get enough miles in to satisfy my urge.
You see, the last few years have been about getting out on a bike as much to clear my head as it was to purely ride for the fun of it. There may be better ways to relieve stress, but I sure can’t think of any.

About four months ago, I took a job that requires a good deal of traveling. It took about 4 trips of about 2 weeks each, for me to learn my craft and get comfortable in my new environment. Now I had to figure out how I was going to be able to squeeze in some miles while on the road.

Since the stationary bikes at the hotel gyms were completely out of the question, I investigated the breakaway frames from Ritchey and Surly. Both would do the trick but would prove rather costly to check with the airlines.

A recent trip to a midwestern bike shop, revealed that most big city shops have been refraining from road bike rentals due to the growing “City Bike” market in just about every urban environment. While in that shop, I noticed a folding bike. I even took it for a test ride.

I purchased one for my daughter when she was in college. A simple phone call revealed that she hadn’t used it in a couple of years. All I had to do was pick it up.

My first trip to the airport was Golden. The airline checked the bike for free. In it’s case, the bike weighed only 30 pounds and was under the oversized bag limits. Feeling like I’d solved the transportation issue, I was free to explore Kansas City on two wheels.

I won’t go into details or outline my routes, but I will say that I was able to set it up to fit my long, lanky frame and managed four rides in 12 days on a recent trip to Missouri. Not ideal, but better than an indoor suffer fest on a spin bike. 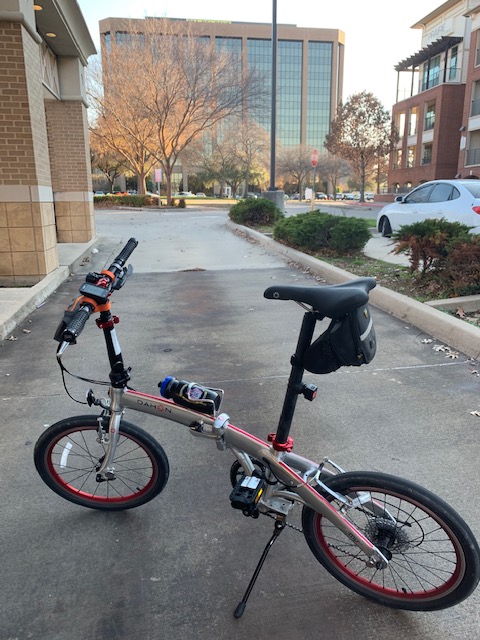 A few weeks later, I managed a few rides in the Dallas area with a few more in the San Bernadino, CA area. I really think I’m in love with the mountains on the west coast.

Mt. Rubidoux in Riverside was the highlight of my trip. Climbing on a folding bike proved no easy task, but riding in the shadows of Big Bear and Baldy was an incredible experience. Big Bear sits above 7,000 feet and Mt. Baldy is the iconic climb used in the Tour of California. Both were snow capped, just adding to their stunning beauty!

Stay tuned for a year in review post, coming up in early January. In the meantime, check out some more pics. 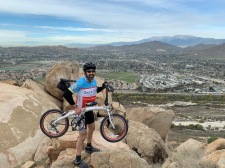